Can you remember a time in life when you were challenged in conversations to find a simple answer to the question “What do you do?”

This question typically aims to elicit the nature of your work or ministry. While it’s up to your discretion as to how to portray the adventures of your waking hours, I find that if I don’t put it into a succinct phrase or two, the questioner usually begins to shift and fidget, or worse, look back at me like that RCA Victor dog.

For almost three months now, my response to that question has usually included the mention of the words vocation ministry, and in so responding I’ve come to some new awarenesses. First, vocation ministry has little chance of making sense to anyone until the inquirer knows about my identity as a Sister of the Congregation of St. Joseph. And that awareness has led to another: I’ve actually been implicitly on call as a vocation minister ever since I’ve become a Sister of St. Joseph. 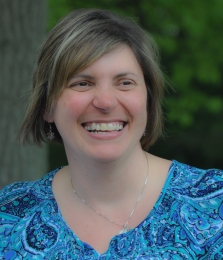 Some of us have had the lived experience of being explicitly on call in their work, and so have a head start on this concept. Sister Paula Terese Pilon, CSJ, for example (left), works as an at-home hospice caregiver through Cleveland Clinic on weekdays, but is also on call on rotating weekends. As we know, life happens outside of a Monday-Friday schedule, and someone needs to be ready to respond. When on call for hospice care, Paula Terese is in a kind of ready-to-respond consciousness that differs from when she’s “clocked out” on a free weekend.

So, does God ever “clock out?” Dutch theologian D. Erasmus (d. 1536) asserted a response—in Latin, as he was wont to do—that coheres with the theology of all Abrahamic faiths and more:

“Called upon or not called upon, God is present.”

Interesting, isn’t it, that this phrase (as well as its various translations) have been showing up lately in contemporary graphic art. There are several posters and wall art that feature it in connection with famed psychoanalyst Carl Jung (d. 1961), who had had this phrase carved over the door of his home. Jung is the one, by the way, who proposed that we humans share a collective unconscious.

So, what is it we believe that God is up to in this omnipresence?

Isn’t God always calling us in some way to participate ever more radically in God’s own flourishing life and outpouring love? Haven’t our own “vocation stories” been written out from day-to-day encounters with the God of Life and Love, through the ones who have made God manifest in our lives? As you may have guessed, my answers to these questions are Yes, and Yes!

Being implicitly on call means to me that I’m alert to how God may be acting in my life and in other’s lives, and inviting them to take a step in joining the divine mission of unifying love. Simultaneously, God is calling me to model, invite and welcome.

Last June, attendees of the Skowhegan Moose Festival which takes place in Skowhegan, Maine, attempted to set a world record for the most amount of people calling moose at the same time. Did you know there wasn’t a record for this yet? Well there wasn’t, but now there is because the Bangor Daily News recently announced that the effort was confirmed by Guinness World Records. A total of 1,054 people, “grunted, wailed and otherwise channeled their inner moose” according to the official press release. If you have to know more about this you can read the story here.

What does this have to do with vocations? Let’s just say that it got me pondering how we Sisters and Associates of the Congregation of St. Joseph could muster our individual and collective consciousness to call people to our mission of unity and reconciliation. I’ve realized that I need to sit prayerfully before God and a mirror and ask which of my own attitudes and behaviors nurtures an invitational and welcoming disposition, and which inhibit the same? Borrowing from St. Ignatius, I might call this question a vocational examen.

We as followers of Jesus are on call every day to deepen our atunement to God’s calling. This is certainly the Lenten Gospel message! Jesus promises that our own deepened responses to his call to unity will bear much fruit, which could mean becoming the stuff of someone else’s vocation story.

Sister Mary Jo Curtsinger, CSJ, D.Min. is a practical theologian who is co-ministering in vocation work with Kate Theriot, M.S., CSJ Associate Director. Whenever Mary Jo visits her sister’s family in Vermont, she is always hoping to sight a moose (from a safe distance of course).

Learn more about the Congregation of St. Joseph here. Meet a few of our Sisters including Sister Mary Jo here. To learn more about our vocation ministry, click here.