You can find Sisters of St. Joseph
all over Latin America, and the world!

What’s a sister from Chicago doing at a meeting for Latinas in Brazil? Happily, I was invited (I didn’t just crash the party!) and I jumped at the chance.

It turned out there were almost a hundred of us—many from Brazil, as well as some from Peru, Argentina, Bolivia, and Haiti. There was also a sister from Mozambique, one from India, myself from Illinois as well as a sister from West Virgina. Yes, Sister Barb McCartney and I were the only two from the Global North. We were welcomed with love beyond imagination, yet it was an enlightening experience to be the relative “outsiders” as English speakers. 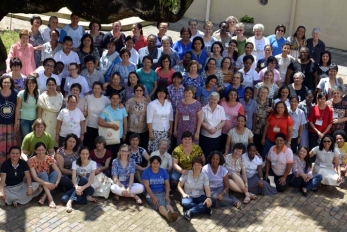 We all came together,
and learned to work through the language barrier!

Our presenters spoke Spanish, which was mostly understood by the Portuguese-speaking Brazilians. Every once in a while, the women listening to Spanish with Portuguese “ears” would raise their hands and say the Portuguese equivalent of “wait, wait, I don’t know what the heck you just said!” The Haitian sisters spoke French and Creole, but their mentor understood Spanish, and so translated for them.

Sister Barb and I knew enough Spanish between us to get us into conversation with other sisters, but nowhere close to enough to get us all the way through. So luckily, we were provided with the translation services of Brazilian Sister Bette. Other sisters sometimes pitched in to help Sister Bette get ideas across to Sister Barb and me (It took a village!) 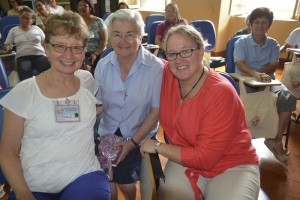 That’s me, on the left, with Sister Barb (right),
smiling because Sister Bette (middle) had our back!

Sometimes we could feel the discombobulation of it all. But, for the most part…it worked! It’s amazing how quickly sunny smiles and warm hugs break the ice! And the Latina sisters communicated unsparingly with these affectionate media. Song and dance-y movement introduced every session.

The purpose of coming together, after all, was to open ourselves more deeply to our common spirituality and life: echoing together the prayer of Jesus that all might be one, ourselves with the dear neighbor “without distinction,” even as we are one in God (John 17:21). One could expect a good bit of relating in such a group, right? 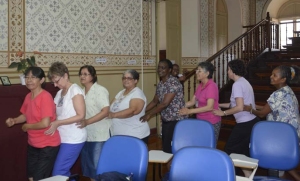 Communication can come
in many forms, even a conga line!

The ingenuity of the organizers was in fashioning many of the prayer times such that they were less dependent on words. Prayer was often centered on gesture and music, images and imagination, symbol and gazing. In so doing, we were able to share our hearts without the frustration of the language barrier. Upon reflection, I realized that this freed up some of my energy while staying totally engaged. It was quite moving, really.

And heavens to Betsy! These Brazilian sisters knew a LOT of songs in common! It felt like we were hanging out with Maria and the von Trapp family singers. There were also evening dances that were crazy fun. For one, sisters wore traditional ethnic dress; for the other, the Brazilian sisters kept the contemporary tunes flowing. We didn’t need to speak the same language to understand the joy in song and dance!

Song and dance is joyful,
no matter your language!

So, what I observed is that my Latina sisters’ spirituality is very much embodied. They are very comfortable in their own skin, and relate to one another with touch, embrasos y besos (hugs & kisses) as well as pats on the shoulder and hand-holding. And there are always vibrant smiling eyes to meet one another.

What an amazing trip! What a wonderful way to remember and deepen our understanding that we are “bearers of the tradition,” carriers of the charism of unity and reconciliation, at the same time as our Sisters and Associates of St. Joseph all around the world. We are all more the same than we are different, all speaking in the language of unity and love. I’m leaving Brazil with a deeper sense of gratitude for the gift of belonging to the “Congregation of the Great Love of God.”

Obrigada! That’s Portuguese for “thank you!”

Sister Mary Jo Curtsinger is a former school psychologist and high school teacher of theology. She is now working on a doctoral degree at Catholic Theological Union. She loves movies, dancing, and little kids.

12 thoughts on “Can We Talk? Speaking the Language Known ‘Round the World”