“In an old house in Paris that was covered in vines, lived twelve little girls in two straight lines”

I hold onto a favorite childhood memory, I think from when I was five years old. My mother held my hand as we crossed the broad downtown streets to the grand Columbus Public Library. There, we found Ludwig Bemelman’s classic children’s book, Madeline. This was the beginning of my love of books. (Never read Madeline or want a refresher? You can listen to the book being narrated here.)

Somehow, the persona of Miss Clavel, the matron of those twelve little Parisian girls who “walked in two straight lines” during their time in Catholic boarding school, has stayed with me. (I’m still working on developing my Madeline persona—but that’s for another blog!)

Of course, don’t we all know that there is not too much in life that is as ordered, structured, and tidy as “two straight lines?” I certainly learned this lesson again and again during my five years in Tanzania, from 2010 to 2014.

Do You See Two Straight Lines?

Oh, I started out as a Miss Clavel at St. Joseph Hostel (“a boarding school without the school” as I describe it, since the girls at the hostel live and study their, but actually attend classes at a nearby school. ) But soon, I  had to abandon this persona as I guided teenage girls during their years of high school, and learned that nothing moves in “two straight lines” for teenagers! You parents of teenage girls are laughing at me now, I’m sure.

My time with the girls and the other Sisters of St. Joseph with whom I served, from India, Brazil, and Canada, transformed my life and gave me a world view that is much more up-side-down than from the perspective I had previously; one of a person from a first world nation. 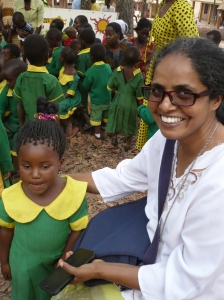 Another sister from the hostel,
with a kindergarten student

So, it was with great excitement and gratitude that I was able to return to my second “home” in southwestern Tanzania for two months at the end of 2016. I was asked to fill in at the Hostel for a Sister who had returned to her home country for medical treatment. Fortunately, I knew what to expect this time around, so I left my Miss Clavel identity back in the U.S. (Well, I did feel like I was forever straightening desks and tables into nice lines in the Hostel’s classrooms and dining room! But otherwise, I kept Miss Clavel in check!)

It’s Been a Long Day!

The girls were studying frantically towards their final examinations since the school year  in Tanzania runs from January to December. I was there to help them stay on task, but certainly not to keep their spirits in two straight lines. In fact, the girls have taught me over the years to find your own lines–whether they be dashed, squiggled, curvey, and yes, sometimes straight!

And what happens at the end of a school year? Of course, graduation! It was my joy to attend two kindergarten graduations, and to be with Tanzanian children who took me back to my Madeline years—but, oh, in a very different setting! 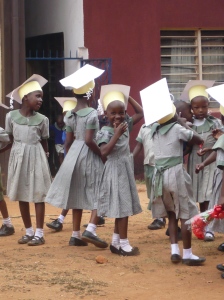 Which Girl Might be Our Own “Madeline”?
Maybe the One with the Giggles?

Not one darn straight line in sight, with children running around, one hand grabbing their flying-off-the-head graduation caps. Wonderful free-form dancing by the children and their families that had even this old Miss Clavel moving her hips and clapping her hands.

Delighting in watching even the smallest graduate keeping rhythm on a goat-skin covered drum. Sharing in the parents’ pride in their children, particularly in a country where every year of education is a privilege.

Congratulating the teachers and staff for their love of the children and their hard work teaching them ABC’s and numbers in Swahili. And finally, loving the Sisters of St. Joseph who work so hard each and every day in an adopted culture to support the dream of universal education for Tanzanian children. All culminates in graduation day! 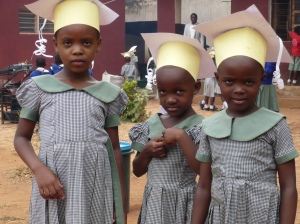 The country, the language, and the culture are not my own. However, there is no better way to experience the one-ness of the human family than to be immersed in a different culture or place. Once again, I experienced our Creator’s divine dream to bring all into one family—and what a fun way to dance into this reality!

A Proud Mother and her Graduate!

Parents are parents, children are children, teachers are teachers, and Sisters of St. Joseph are all the same wherever we are! And this Miss Clavel will never be the same for it!

Sister Jackie Goodin worked as a librarian at the Cleveland Public Library for 10 years prior to joining the Congregation of St. Joseph (and is still a pretty good whiz at book trivia!) Since receiving her Masters in Social Work from Case Western Reserve University, she has held several positions as a Clinical Social Worker. She is a darn good cookie baker, and loves to read detective stories from around the world.

8 thoughts on “Miss Clavel in Tanzania: Learning to See the World Upside Down”