Superheroes come in all shapes and sizes. Many are giant-sized, monster-looking creatures with fire in their eyes and weapons in their hands. They are the stars of mega million dollar movies packed with ear shattering screams and death-defying stunts.

My superhero is about 31-inches high with deep brown eyes. His only weapon is a nine-inch nurf baseball bat, an amazing family and a heart the size of Texas. He recently celebrated his second birthday at Lurie Children’s Hospital in Chicago where he underwent his second bone marrow transplant. 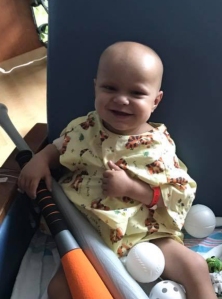 Nine months ago, Beau, the youngest of seven children, was diagnosed with Stage 3 neuroblastoma, a rare cancer that most commonly affects small children. Despite routine visits to the pediatrician, his mother observed a bit of lethargy and irritability that was out of character for her beautiful and very active baby boy. Doctors at the local children’s hospital gave his family the devastating news and outlined the course of treatment that would involve months of chemotherapy, radiation, bone marrow transplants and several surgeries. Despite the aggressive and drastic treatment plan, the prognosis was not good.

Beau had other plans.

During the months since his diagnosis, Beau has touched the hearts of thousands of neighbors, friends and others whom he has never met. Although he is far too young to understand the meaning of the quotation about never doubting the ability of one life to change the world, Beau’s courageous battle has proved to all that it can and does happen.

Beau’s journey has sparked an outpouring of kindness and generosity that has changed his corner of the world. Ribbons were wrapped around every tree and pole within a one mile radius of his home reminding all to pray for Beau. Multiple fundraising events brought volunteers together as a tremendous show of support and to raise money to help cover some of the astronomical expenses not covered by insurance. A bake sale intended for the local community after all of the Sunday Masses in his parish, drew the attention of hundreds who lined up outside the doors to buy a cupcake and make a donation.

A high school service project, originally designed as a small garage sale, expanded to a block-long event that attracted the attention of several news markets and raised thousands of dollars. A blood drive welcomed a record-breaking number of donors who waited for hours just so that they could help. The classmates of one of Beau’s siblings held a baseball game that brought families and neighbors together to raise additional dollars.

In a nation divided over so many issues, Beau’s story, the medical journey of a two-year-old, needs to be shared. Beau’s journey has called out the best in literally thousands of strangers because it touches hearts and transforms lives. It is an invitation to hug the kids in our lives a little tighter, extend simple kindnesses to those who might need a helping hand or listening heart, be open to the wonder and potential of children, and practice an attitude of gratitude.

Beau’s story will probably not melt many hearts in Washington or Moscow, but it does demonstrate the power of a community to rally in a remarkable outpouring of kindness and compassion.

Perhaps this is the “stuff” of superheroes.

Sister Jean McGrath is principal at St. John Fisher School in Chicago and enjoys a good book, a good conversation, and a great bargain.

32 thoughts on “What Makes a Superhero?”