If you, like me, love the movies, you’ve probably heard of Lady Bird, a movie by Greta Gerwig about a girl in Catholic high school who is navigating her future, her family, and her own faith. I’d heard a lot about this movie, in part because of the widespread critical acclaim that it’s received (it was nominated for several Oscars) and in part because many Catholic news sources were talking about it. And so, when one of my best friends and I headed to the theater a few weeks ago, it seemed like the best choice for our movie night.

While I had heard a lot about the movie, I didn’t know all of the details. But I anticipated that I would see some parallels to my own life. As a woman who went to an all-girls Catholic school that had been founded by sisters, I figured that Lady Bird and I were bound to have some crossover. What I didn’t expect was that the film is set in 2002, the same year I graduated from high school. I will admit to you, that this threw me for a bit of a loop. My friend and I turned to each other nervously, the realization hitting us at the same time that this film might hit a little too close to home for our own comfort.

The look I’m sure I gave my best friend as the movie started.

We were, of course, right. We were transported back to the early aughts (the first decade of the 2000’s), to days filled with plaid skirts and button ups, mixers and school plays, uncertainty about our lives and our futures. Some of the things that stood out were small reminders of long forgotten Catholic school-isms that were a part of growing up: checks to make sure that our uniform skirts were long enough, making sure we “left room for the Holy Spirit” when dancing with boys, all school masses tailored to our young lives, the importance of female friendships.

There’s nothing like the female friendships you make in Catholic school.

But what stood out to me as the most true to life about this film was the way that sisters were portrayed. Often the voice of reason in my own life, in ways that I certainly wouldn’t have understood as a teenager, the sisters that run the fictional Sacred Heart High School seem to be a guiding compass for the main character. And so, I’d like to offer you my thoughts on the how movie represented Catholic sisters that really rang true.

1. Sisters encourage us to find the best parts of ourselves

Early on in the movie, the title character, Lady Bird, meets with Sister Sarah Joan, who is the principal of the school. Lady Bird, like many high schoolers, seems adrift. She often does things in dramatic ways as she works to find herself. Sister Sarah Joan suggests she try out for the school play, to use some of her natural dramatic skills in a way that might be more productive. This guidance may not be what Lady Bird expects, but it encourages her to be open to possibilities she had not explored previously. This was a wonderful reminder to me that sisters often act as the people in my life that encourage the good in me to come out. Without even realizing it, my interactions with sisters often lead me to a deeper understanding of myself and my place in the world, and encourage me to be the best person I can be.

2. Sisters have a sense of humor

Lady Bird plays a prank on Sister Sarah Joan later on in the film that, while harmless, she is worried she’ll be in trouble for. Instead, Sister Sarah Joan laughs. This moment seemed so poignant to me because it reminds us of an important thing that many people seem to forget when they talk about sisters: sisters are people! Just like the rest of us, they have a sense of humor and can laugh about themselves.

Whether, like me, this film made you nostalgic for your own Catholic school days, or reminded you of your life in the early 2000’s, the message about Catholic Sisters seems clear. Catholic Sisters can touch and shape our lives in ways we may not even realize. Their humanity, encouragement, and love are some of what makes them such an important part of our lives. 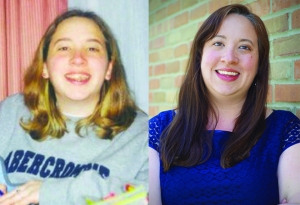 The author in high school versus today

Elizabeth Powers is the Electronic Communications Manager for the Congregation of St. Joseph and manages the blog, Beyond the Habit. She sometimes acts as a contributing writer. She loves reading, writing, and Harry Potter.

15 thoughts on “How Lady Bird Got Catholic Sisters Right”