October 15th is Founders Day for the Congregation of St. Joseph, the day that sisters, associates, and staff celebrate six women and one Jesuit priest coming together in 1650 France to begin a new community of women religious. These women would go out into the city and minister to the dear neighbor, looking to care for the needs of the people wherever they existed.

Founders Day is always an important day for the congregation, marked by service, prayer, and celebration. But this year, for me, Founders Day was especially powerful. Because in the days surrounding Founders Day, I was standing in the very place where it all began; Le Puy, France.

The 14 pilgrims on our first day in Le Puy.

I, along with 14 other pilgrims, spent ten days retracing the footsteps of the early sisters, visiting many of the same places they had stood. The streets of Le Puy are still lined with the cobblestones used to create them hundreds of years ago. The buildings and rooms where our first sisters ministered to orphans, learned the needs of the people, and shared the state of their heart still stand.

(Clockwise from left) The cobblestone streets of Le Puy, the building that housed the original orphanage our sisters ran, and the door that once was the entrance to our sisters home.

While the old city of Le Puy is still made up of the same buildings that stood in the 1600 and 1700’s, it is bustling with the life of today. Men, women and children still go about their daily lives amongst the history, some of them making a living similar to our first sisters.

In order to support themselves, the first sisters of St. Joseph in Le Puy were lace makers. Today, bobbin lace making is still one of the things Le Puy is known for, and we were thrilled to get to see a demonstration of how this lace is made by hand, in the same way our sisters would have made it over 300 years ago. 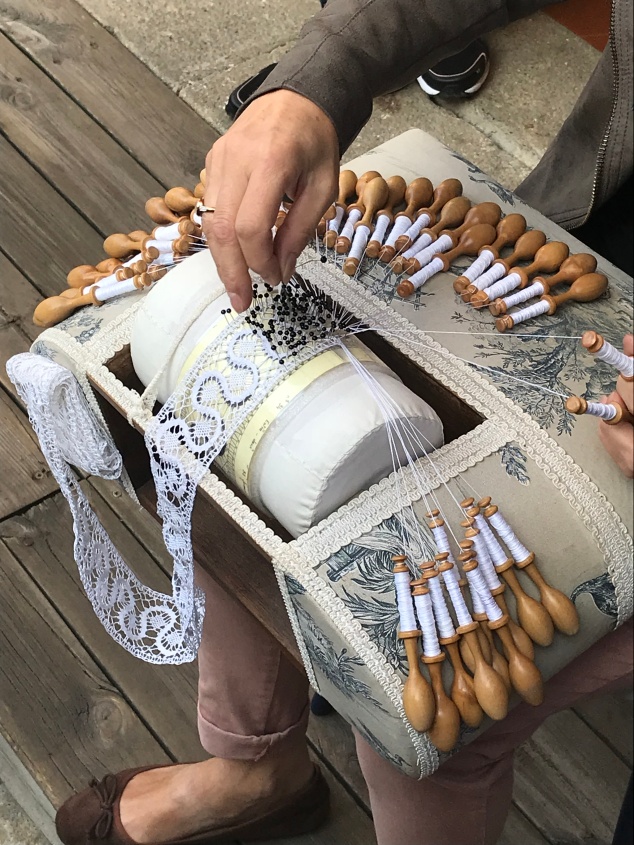 For me, the portion of the pilgrimage that held the most meaning was our visit to”the kitchen.” During my time working for the sisters, I’ve heard a lot about the kitchen. Also known as “the hearth,” the kitchen is the last remaining portion of the original structure where our sisters were first founded. The kitchen was where these women would come together, share information about the needs they had seen in the city, share the state of their hearts, and work towards a better future for all of their dear neighbors.

The kitchen in Le Puy

It was awe-inspiring for me to get to stand in this small room, where the Congregation’s roots took hold. But what was most inspirational to me was being surrounded by other people who are working to move the mission of the Congregation of St. Joseph forward.

Today the Congregation looks different then it did in 1650 France, and so did our group! Sisters, associates, staff, and partners in ministry all stood together in the kitchen, listening to the stories of the first sisters. And, while we have each come to the congregation in different ways, we are all doing our part to continue the legacy of six women who, along with a Jesuit priest, understood the need to make a difference in the world.

Our group of pilgrims in the kitchen.

I’ll write more about my time in France in the coming months (once I am less jet lagged!) because there is so much left to share. But as I think about Founders Day,  and my trip to Le Puy, I am so grateful for the wonderful community of women and men who stand for love, justice and each neighbor in our world.

Elizabeth Powers is the Electronic Communications Manager for the Congregation of St. Joseph and manages the blog, Beyond the Habit. She sometimes acts as a contributing writer. She loves reading, writing, and Harry Potter.

27 thoughts on “Living Love: My Journey to the Birthplace of the Sisters of St. Joseph”