So do you? Know a Muslim? Personally, that is? If you say “Yes,” survey says you are much more likely to have a favorable impression overall of Muslims.

This finding said to me: In these days of a rising discriminatory practice and Islamophobic rhetoric, spikes in hate crimes, governmental actions curbing the influx of refugees and immigrants from Muslim-majority countries…can we just do something to respond to our church’s call to solidarity with our Muslim sisters and brothers?

That’s the plain-talk version of my doctoral thesis-project proposal, and here’s what I’ve been up to:

This summer I searched and found five Catholics and five Muslims (aged 22-28) who were committed to their own religious tradition, but were newcomers to interfaith circles, and who were willing to gather for four Sunday afternoons in August to get to know one another.

Four weeks later, this is how it looked: 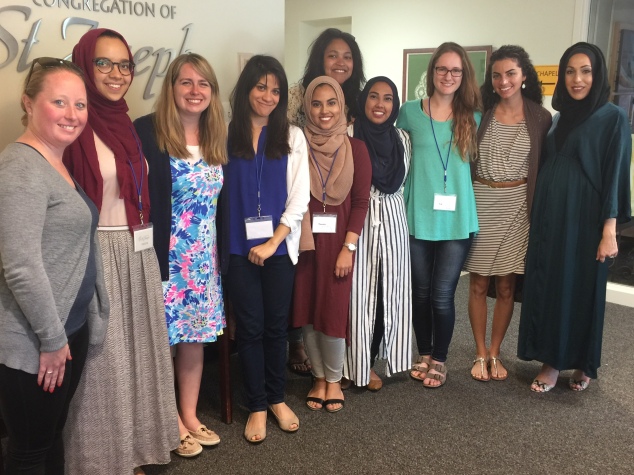 This picture is surely worth at least a thousand words. But here are some of these ten women’s words.

I asked them at the end of our time together to complete these sentences:

My overall feeling about having participated in these sessions is_____________.

One key outcome of these gatherings for me is an increase in ________.

“Sisterhood” indeed evolved among us. Around the middle of our time together I realized that the women had started referring to each other as “our Muslim sisters” and “our Catholic sisters.” Amazing.

Yet there was not a magic formula for getting there. Change happened because these faithful and smart young women asserted that our shared humanity would be the common ground for opening themselves to appreciative learning from one another, in a spirit of respect, humility, and courage.

Once we framed our time together this way, it becomes easy to relax and just have fun. 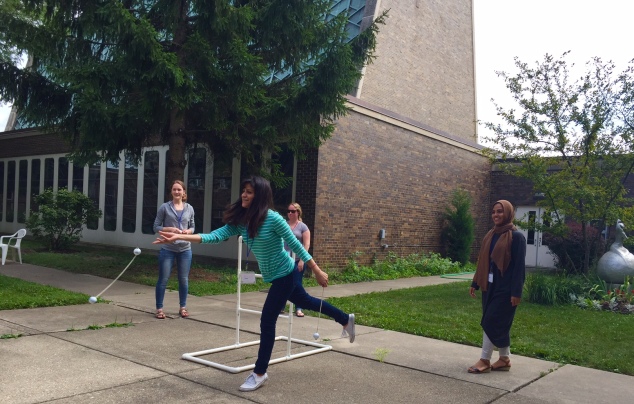 Our first and fourth meetings were at the CSJ Center in LaGrange Park, the middle two at the American Islamic College in Chicago. Day Two featured “speed faithing,” (a variation on “speed dating.”) Every Catholic paired with every Muslim for about 8 minutes, rotating around when I signaled time-to-move-to-the-dear-neighbor. Here they got to satisfy their curiosities about the what, why and how of spiritual practices, beliefs, family and community life, whatever they wanted to ask!

In the third meeting we expressly set out to learn the “joys and griefs” of being faithful in our society today. Listening and sharing shifted down into a palpably deeper gear. 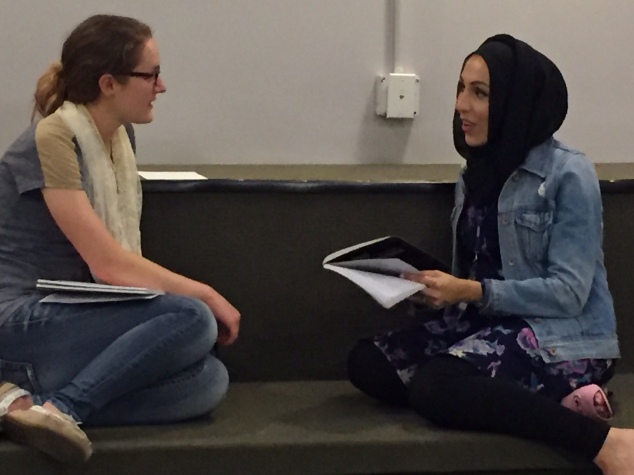 At our last gathering, I introduced the prayer practice of sharing the state of the heart. This is the simple, profound way that Sisters of St. Joseph have prayed together since our 17th Century founding. I would say that many moments of such sharing had transpired even before these women knew what it was called. 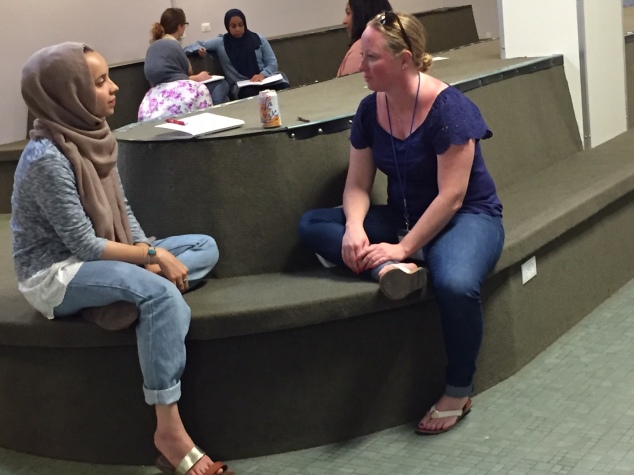 When I gaze upon these photos again, I am awestruck and humbled to realize that God worked out some unity and reconciliation through my efforts. I say it’s no small thing to help God engender hope, gratitude, and love in people’s hearts.

Yes, I know some Muslims personally. They’re my sisters, actually.

If you’d like to do more reading about Muslims and Islam, here are some trustworthy and eye-opening sources:

Mattson, Ingrid. The Story of the Qur’an: Its History and Place in Muslim Life. Oxford: Blackwell, 2008.

Sister Mary Jo Curtsinger is a former school psychologist and high school teacher of theology. She is now working on a doctoral degree at Catholic Theological Union. She loves movies, dancing, and little kids.